Is one allowed not to be madly in love with a Jim Jarmusch film? I mean is it even legal? Let’s find out, shall we?

The peaceful town of Centerville finds itself battling a zombie horde as the dead start rising from their graves.

Hah, the by-line for DDD already makes it clear, and unfortunately highlights one of the movie’s few positive aspects: The cast is star-spangled! The Greatest Zombie Cast Ever Disassembled sounds like Jarmusch made it a sport, like competitive Zombie film making. Is like “Hah! Me gotz da most dead celebs ever!” or something like that.

Oh well, it’s nice and all when you spot Iggy Pop as coffee slurping zomb, or Rosie Perez as TV reporter “Posie Juarez”. Or Tom Waits in a typical Tom Waits role as hobo “Hermit Bob”. It’s hard for me to imagine the real Tom Waits actually live somewhere, in a place with a real address, and made of sticks and stones.

Unfortunately the fun ends there and then since none of them have real stories and their appearances in the DDD are just that, appearances. Their stories end without going anywhere.

Same can be said about the whole movie. SPOILER!!! Look away now! The gigantic cast will literally be dissasambled during DDD’s runtime. On camera and off. This is one apocalypse where the zombs win and the human race goes under.

In the doomed cast we find among others: Steve Buscemi, Danny Glover, RZA, Tilda Swinton and Selena Gomez. Talking about Swinton, she’s again at her over the top weird best in DDD, alas her story is as stupid as all the others. Her Scottish samurai/funeral home director turns out to be more alien as most people would imagine and she survives the zombiecalypse but why and also why and … whaaaa???

And the zombie slashing action is rather lame, too. So we don’t even get too excited or exciting stuff to see. But as we know there is no Jim Jarmusch movie without a message. And here I am at a loss: What did Jarmusch try to convey in DDD? Critiqueing the USA’s ruinous fracking practices. In such hamfisted way? As a criticsism of American consumerism it missed the mark, like totally. Having a buncha zombs stumble through the stores, gowling “Wi-Fi”, “bluetooth”, “coffee” for two minutes leaves no impression on anybody.

Was DDD maybe supposed to be a comedy? Well, the scenes with our smalltown police force, made up of Bill Murray, Adam Driver and Chloë Sevigny respectively … we gotta talk about that particular part of DDD in particular. 😉

Listen, I don’t mind when a character breaks the fourth wall, as it’s often done to great hilarious effect (Ferris Bueller’s Day Off, Wayne’s World, Deadpool spring to mind) but what Murray and Driver did here was … weird and made me feel uncomfortable. They didn’t break the fourth wall as such, they didn’t address us, the audience, directly but all of a sudden their conversation veered off in completely unexpected ways.

For example when Murray’s Chief Robertson asks Driver’s Officer Peterson why a song in the radio sounds so strangely familiar and Driver just says “It’s the title music”, which it is indeed. Or another time when Murray asks if they are improvising their lines now. Kinda funny, kinda creepy. I guess they indeed improvised that scene. When Murray asks Driver at a later point if he knows what to do now and Driver tells him what’s going to happen to them.

Driver: “Because I’ve read the script.”

Stuff like this – possibly improvised – scene can be funny and/or enlightening … in a film student’s project movie; a famous master director like Jarmusch should be above such cheap party tricks. But it’s gotta be said, Murray and Driver work well as a team and have great chemistry. Both are like deadpan actors and Jarmusch casted them oh so well. But maybe he shouldn’t have trusted them with that many improvisational parts but given them a solid script instead.

For the outstanding big uns of the allstar cast, Driver’s and Murray’s roles didn’t add much to the very weak plot and their stories went nowhere, same as the whole movie. 😦

Oh wait, there was one scene that made us giggle a bit. It involved a star destroyer keyring and something about Star Wars and great storytelling and Adam Driver. 😉

CONCLUSION: Guys, you see me with a big fat question mark hovering above me noggin.

It’s a Jim Jarmusch flick ffs!!! That means something, does it not? I know his movies haven’t always been the greatest but always had at least traces of greatness in them. He always had a message to convey, and may it’ve been a very simple one. Nothing against simple messages, if they work and are made clear it’s all good. His whole oeuvre was pleasant in more than one way. Was. Up to now, up to The Dead Don’t Die. This flick was just lazy in all aspects. You can’t just assemble/dissemble a great cast and bank on them to fix all your problems by writing their own dialogues, improvising on scene and directing themselves.

I can’t make any sense of this flick. Was it a protest against fracking? FAIL! Was it a comedic farce of American small-town people and their livestyle? Seen it done better and to much greater effect.

That’s not to say DDD wasn’t entertaining. At least hubby enjoyed it. But what does he know? This is my review, not his, ffs! 😐 And I felt my attention waning since this movie had no story arc, and wasn’t going anyhere, as already mentioned once or twice. In the last couple minutes I could hardly keep my eyes open. And I’ve seen Jarmusch movies with only 10% of the DDD action that managed far better to keep me entertained.

DDD, if it had anything to say at all, failed in all aspects and looks in its whole, like a bad montage of countless cutscenes and a hastily nailed together script. Not entirely unlike The Rise of Skywalker. 😦

So, I’m very sorry to say … and you won’t believe how sorry I really am … The Dead Don’t Die is a shitflick. 😦 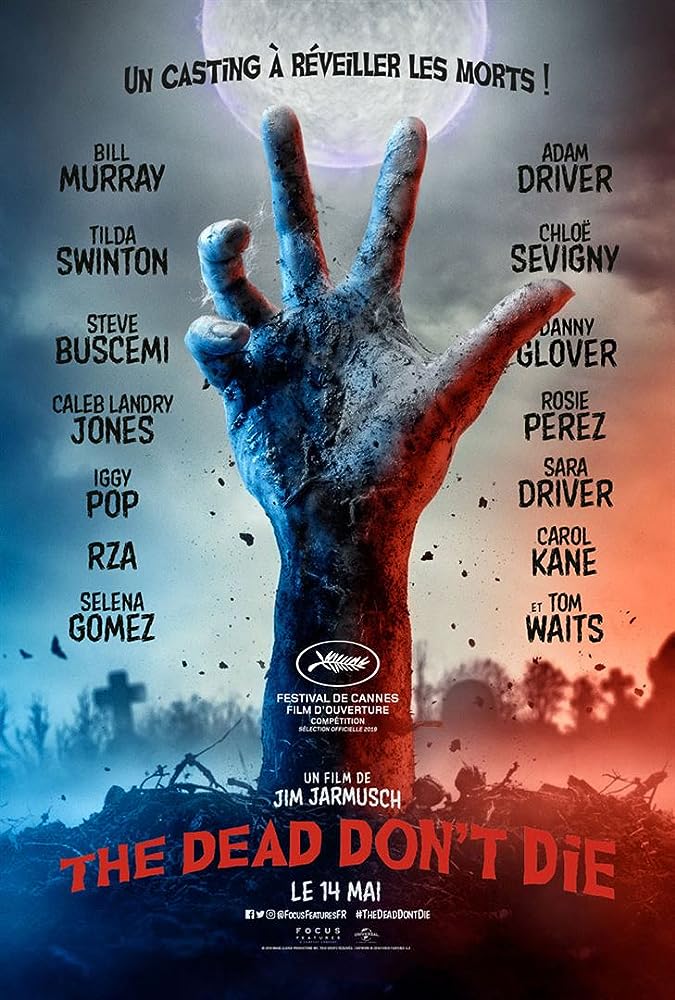 And what Grace thinks:

I totally agree with the boys but absolutely disagree with Grace: What Jarmusch delivered here is abolutely no mainstream but 100% Jarmusch … only not up to his usual level.