And Then There’s Also This …

"No one is even looking for Washington to lead" in this pandemic: this is the type of thing that could only be written from the ivory tower of corporate US media disconnected from international realities. https://t.co/K55Or75DTX pic.twitter.com/B3D2YUQ4df

It’s much more historically accurate than everything taught in American classrooms. In fact the rest of the world wonders how most Americans do not even know these things. 😮

No. The world is not missing American leadership. That’s because most people of the world are not “ardent Atlanticists.”

Their fundamental assumptions about the U.S. is that it is exceptional only in its warmongering and cruelty. Poll after poll have shown that “the world” does not have a widely positive picture of the U.S. It instead sees it as the greatest threat:

The NYT piece quotes four white European men from think tanks and universities who are all known for pro-U.S. views plus a French man of of Arab heritage who works for the Atlantic Council, a U.S. think tank financed by the U.S. government and U.S. weapon producers. A quote from one U.S. neoconservative is also included.

The NYT writer, Katrin Bennhold (pictured below), seems to think that their opinions represent “the world”. Here is news. They don’t. 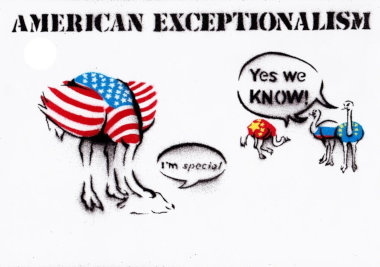 The delusion and fake historic views in that piece are breathtaking:

The country that helped defeat fascism in Europe 75 years ago next month, and defended democracy on the continent in the decades that followed, is doing a worse job of protecting its own citizens than many autocracies and democracies.

Bennhold can be happy that her editors have cleaned up that still bad paragraph. On Twitter she had formulated it as this:

The U.S. did not liberate Europe from fascism. The Soviet Union did that. Between 1942 and 1945 it destroyed the German Wehrmacht on the eastern front. One can reasonably argue that D-Day and the U.S. invasion of occupied France in June 1944 was a mere diversion for the much larger Operation Bagration the USSR was launching in the east.

And what please has the U.S. led but the wars on Korea, Vietnam, Afghanistan, Iraq and numerous other countries?

Instead of defending democracy on the continent the U.S. launched coup after coup whenever majorities in Greece, Italy or other countries voted for too leftish parties. And who by the way helped to hold up Spain’s fascist dictatorship under Franco?

There is a special irony: Germany and South Korea, both products of enlightened postwar American leadership, have become potent examples of best practices in the coronavirus crisis.

The “postwar American leadership” killed 20% of all Koreans and supported fascist dictatorships in South Korea up to 1987. It has since opposed any South Korean leader who has tried to make peace with North Korea. What please was “enlightened” in that.

Someone should tell that ignorant and uneducated claptrap writer that the U.S. hegemonic ‘leadership’ is over and that the world has sound reasons to be happy about that:

Many defenders of U.S. hegemony insist that the “liberal international order” depends on it. That has never made much sense. For one, the continued maintenance of American hegemony frequently conflicts with the rules of international order. The hegemon reserves the right to interfere anywhere it wants, and tramples on the sovereignty and legal rights of other states as it sees fit. In practice, the U.S. has frequently acted as more of a rogue in its efforts to “enforce” order than many of the states it likes to condemn. The most vocal defenders of U.S. hegemony are unsurprisingly some of the biggest opponents of international law—at least when it gets in their way.

The relative decline of the U.S. is not a new development. It has been visible to outside observes for more than 20 years. But it is only now that some of the delusions that Hollywood,  main stream media and the establishment have held up for the last 20 years are finally falling away.

More such delusions will be buried when the extent of the new great depression the pandemic will cause becomes more visible.