O@tM: Turn of the Century

boredom more than nostalgia made me watch two movies from the turn of the century, Kevin Smith’s Dogma from 1999 and the JLo vehicle The Cell from 2000 respectively. Let’s see how they’ve aged, shall we?

An abortion clinic worker with a special heritage is enlisted to prevent two angels from reentering Heaven and thus undoing the fabric of the universe. Along the way, she is aided by two prophets, Jay and Silent Bob. With the help of Rufus, the 13th Apostle, they must stop those who stand in their way and prevent the angels from entering Heaven.

This is an American film.

Could’ve been done nowhere else, didn’t raise any eyebrows anywhere else.

Oh well, it did raise my critical eyebrows, since it was so super wordy and hard to follow at times. What do those angels – Matt Damon and Ben Affleck are supposed to play angels, right? – want? Why are they killing the unsympathetic boardroom capitalists? I mean, yay! have at it. But really now, isn’t that a bit harsh, is it their job?

I guess but can’t say for sure, Kevin Smith mixed a buncha real existing biblical figures and added some new personnel, like the 13 apostle Rufus (Chris Rock) whose appearance makes not much semse other than to show how unfairly the catholic church deleted all black persons from the bible. No other reason for Rufus to be in this flick. A permanently babbling annoyance, a political vessel. And, hey, I really don’t think there were too many black, or white in that regard, people around in Judea of that time. So the chance of a black apostle is rather slim. We should imagine the whole personnel of the bible as brown, Palestinians, fukn Arabs if you so want. and some Italians thrown in the mix. But black brothers? N-hn. 😐

That Jay and Silent Bob had to be in it, was logical and Smith integrated the two figures nicely into the script. Most other stars of the time were wasted in Dogma. The always wonderful Alan Rickman made another very wordy appearance and then went back into obscurity. Salma Hayek as sexy latina stripper/muse Serendipity didn’t leave much of an impression when you’re not an adolescent boy.

And the list goes on about great actors of their time, playing unimportant litle roles and were only in this so Kevin Smith could brag about the number of his friends in high places. The usually quirky Janeane Garofalo in a small role as unfunny co-worker, George Carlin as Cardinal Glick made his small role shine since he’s such a weighty appearance. But that’s all that was there. Not much of importance for the cardinal, sorry.

But the worst cameo was by Alanis Morisette. That God is a woman was an old and lame theory/joke already back then, but that Kevin Smith didn’t make more of the role is unforgiveable. All we see is God/Alanis sillying arond on set. Wasn’t neither funny nor thought provoking.

And Smith wasted some more small-time celebs in Dogma. Sorry, but for me this all appeared to be nothing more than an insider joke. It wasn’t Smith’s reckoning with the church, neither was it an eye-opening satire. It wasn’t earnest, it wasn’t funny, it wasn’t even entertaining.

One could feel sorry for Linda Fiorentino, since she plays the main character, and does it really well. I guess she was also the only person who didn’t have fun during the shooting, since she played her role with exactly the gravitas and earnesty one would imagine … if this was a real supernatural thriller. Unfortunately for her and us Dogma was just a lame joke.

But know what angered me most about Dogma?

Smith committed the cardinal sin, the one thing no storyteller must never do. He ignored a principle that should be engrained into every writer’s mind: SHOW DON’T TELL! Smith completely ignored this old rule and told us a lot, respectively had his actors telling us a lot of things … instead of showing them actually doing stuff. I’m looking at you, Chris Rock. And I’m looking at you, Jeanine Garofalo, Damon and Affleck and particularly you Rickman. Did none of you superstars notice how bad Smith’s script is? Or did you just not wanna hurt a friend?

All the right ingredients, made nothing from them. 😦

Catharine Deane is a psychotherapist who is part of a revolutionary new treatment which allows her mind to literally enter the mind of her patients. Her experience in this method takes an unexpected turn when an F.B.I. Agent comes to ask for a desperate favor. They had just tracked down a notorious serial killer, Carl Stargher, whose method of operation is to abduct women one at a time and place them in a secret area where they are kept for about forty hours until they are slowly drowned. Unfortunately, the killer has fallen into an irreversible coma which means he cannot confess where he has taken his latest victim before she dies. Now, Catherine Deane must race against time to explore the twisted mind of the killer to get the information she needs, but Stargher’s damaged personality poses dangers that threaten to overwhelm her.

“Suspenseful, brilliant and visionary”. Never was Roger Ebert, the great old man of movie reviews more correct than is this assessment of The Cell. It was a groundbreaking movie in the kinda new genre of sci-fi psychokiller crime drama.

But in the days of The Cell everything was still okay and all three of them played pretty good in this thriller. Of course is the screenplay a bit silly, the concept and realisation a bit far fetched but still gives us a plot that makes sense it its own universe. A thing you won’t find in many flicks 20 years later.

I was particularly thrilled by JLo’s acting in this one. I’ve only seen her once before (Out of Sight) and was already aware of her talent. And wasn’t disppointed by The Cell neither. Because she just played her role, not JLo playing a role watch her shine!

Catch my drift? Know what I mean?

There is something changing in people when they pass the threshold from actor to star: They can still do their best and shine in their roles – but there changes something in the way they carry themselves and cultivate their ticks and personality traits. You can’t just unsee JLo or any other H-wood supidupi star, no matter what character they’re portraying. They’ll always be themselves first and foremost.

Of the two male leads I really liked Vincent D’Onifrio better. Don’t get me wrong, this was probably Vince Vaughn’s best work, before he became the brainsaw B-list asshole and Adam Sandler sidekick we know today. 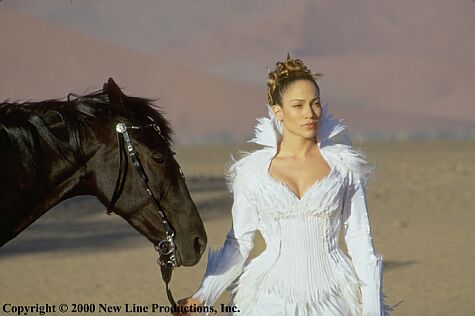 But D’Onofrio really went out there and showed us the uglyness of a destroyed mind, and he did so with gusto and no false shame. What a great, underappreciated actor!

The movie? A yes, everything Ebert said. I liked the stark contrast between the cold and mechanical scenes in the institute, the grungy setting of the crime scene an the lushness of the various deep psychic landscapes. And of course, not to forget, JLo’s costumes! They brought a bit of sensuality and … eroticism (hornyness?) into the gruesome, distorted world of a psychokiller’s mind. 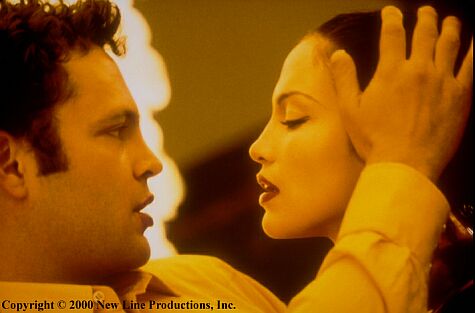 Rarely ever did any actress look finer than her. And she filled her costumes with ever changing personality, depending on the mind world in which the scene played. Often only visible by small eye and mouth movements. Very good work by an up-and coming super star.

In 2000 all the sets were real, not CGI. Which makes The Cell even more impressive. They were theatrically impressive as set pieces, as stage designs, in order to convey what’s going on in the children’s, the killer’s and the therapeut’s minds. That’s one thing modern CGI often just doesn’t get right.

Very good movie, made in just the right – much too short – spot when Jennifer Lopez was just a beautiful and talented, if a little fat-arsed, actress and not the super duper bitchy first rate asshole divaesque biotch we know her to be today. Because of that The Cell has almost historical value. 😉