MIDWAY centers on the Battle of Midway, a clash between the American fleet and the Imperial Japanese Navy which marked a pivotal turning point in the Pacific Theater during WWII. The film, based on the real-life events of this heroic feat, tells the story of the leaders and soldiers who used their instincts, fortitude and bravery to overcome the odds.

Usually when hubby downloads movies it’s the sort I wouldn’t decide on but they are often surprisingly good, when you just go with the flow and enjoy them for what they are.

Midway isn’t one of those rare gems.

As you might have imagined Midway is the retelling of the WW2 battle named after the group of islands, those specs of sand in the gigantic ocean. There are one or two movies about this naval battle already in existence … I guess we’ve watched the 1974 version a couple years ago and weren’t overly impressed by it. The 1974 Midway had all the typical tropes of that time, mixing invented drama of invented people with the real historical happenings.

The 2019 Midway avoided this shit for the most part and stayed closer to the real battle and real existing figures in it. I can not vouch for historical acuratesse but when looking at the director, the insufferable Roland Emmerich, I think a huge amount of artistic freedom was taken. Unfortunately the flick didn’t become more artistic by this. More artificial, yes. 😮

Ok, now we know what kind of film we’re dealing with. It’s an Emmerich first and foremost, bombastic, loud, colourful, wannabe entertaining at all costs.

I could live with that. If it was entertaining.

What I can’t live with, at least not that easily, is when Hollywood can’t find the right tone to show a tragic battle spectacle. Emmerich obviously forgot this wasn’t a Godzilla or alien attack but a dirty little war somewhere in the shitty backyard of the pacific, that brought nothing but death and tears and misery and ended with the greatest war crime ever.

Well, during Midway this atrocious culmination of the dispute is still two or three years in the future, so Emmerich depicts nothing but a harmless little battle … or so he must have thought. But that wasn’t his only mistake. The whole direction is … I’m missing the terminology for what it was … dissonant maybe?

Example? For having the whole battle named after the Midway islands, the islands themselves are hardly ever visible, and we know nothing about them, neither their geolocation nor their political situation or strategic importance. Also, for a movie that recalls a historical happening it would’ve been nice to give us more info about the timeline and show us the most important points throughout the campaign. If you’ve ever watched a docu about Midway you know much more than what this 2-hours movie does convey to us. Some lucky but superduper important concurrences are just glanced over, we never learn about why the Japanese choose Midway as their temporary target. I dunno about the version you’ve watched, our copy didn’t contain subtitles for the Japanese scenes, so we never learn what’s going on at their side.

Midway was a confused mess. Sorry to say. And for once the Hollywood studio system was clever, as nobody in America wanted to stem the 1.000.000.000 woolongs production cost. So in the end the money came from China. They obviously still have a beef with Tokyo and are horny to pay for anti-Japanese antiganda. Anyhoo, Hollywood is very slow to learn about the giant potential of the Asian box office potential, particularly the Chinese one. I have no idea how Midway did in Chinese theatres, in America and Europe it bombed. Which is good. Shitflicks like Midway should soon be buried and forgotten. 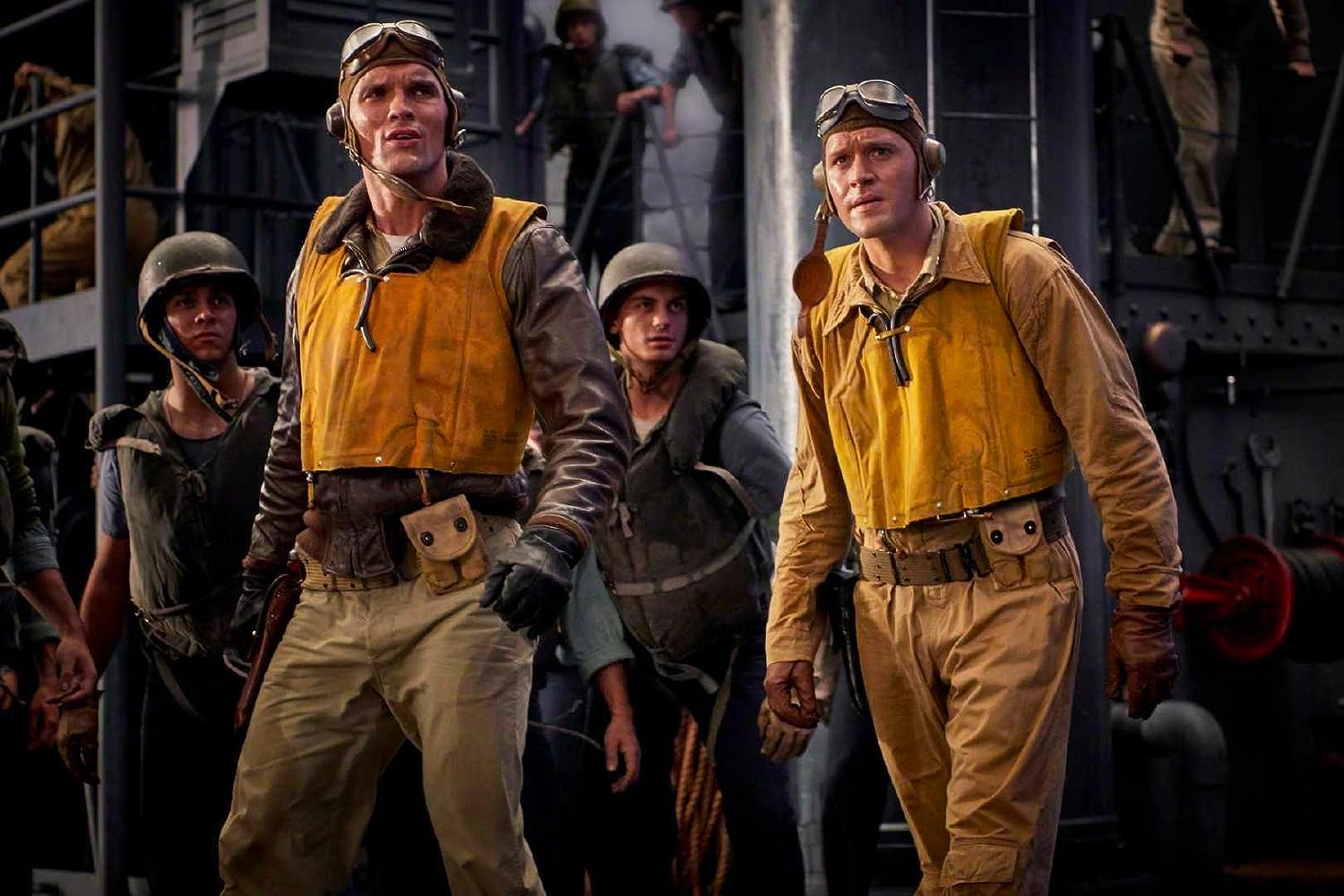 Midway was, as stated a huge mega production and had a decent array of more or less famous stars: Ed Skrein, Patrick Wilson, the inevitable Woody Harrelson, Luke Evans, Mandy Moore, Dennis Quaid and Aaron Eckhart. Lots of B and C-listers, only a couple mega stars on their way out. But hey, let me do a quick comparison with a similar – and similarily bad – flick of a couple years ago: Pearl Harbor. It only had three big names in its cast, Ben Affleck, Kate Beckinsale and Josh Hartnett. See the difference? Yes, those three were absolute hot property back then and guaranteed huge box office success, no matter how bad the flick. As it turned out PH was a real shitflick but it was a stunning shitflick, full of “Bayhem” and big hoopla. Guaranteed success! 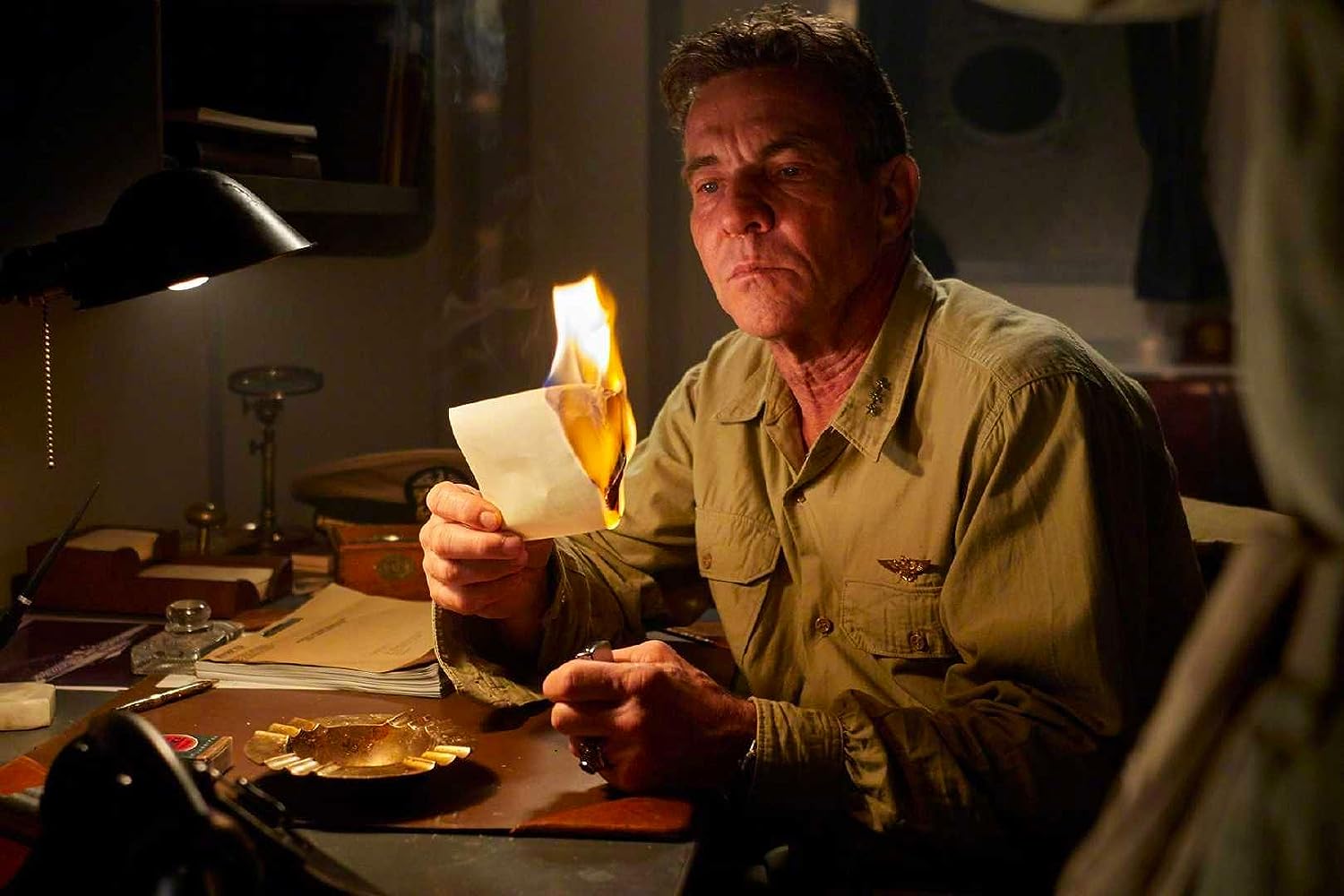 Everybody knows that Emmerich, at least when he was younger, could do the same magic and deliver great spectacle. His Godzilla was and still is the most entertaining of all the Gojira flicks ever made, cheese and all. And don’t get me started about his Independence Day. A movie so full of cheese and walking, talking clichés, it’s almost unbearable. Still it created a hype that still works today. 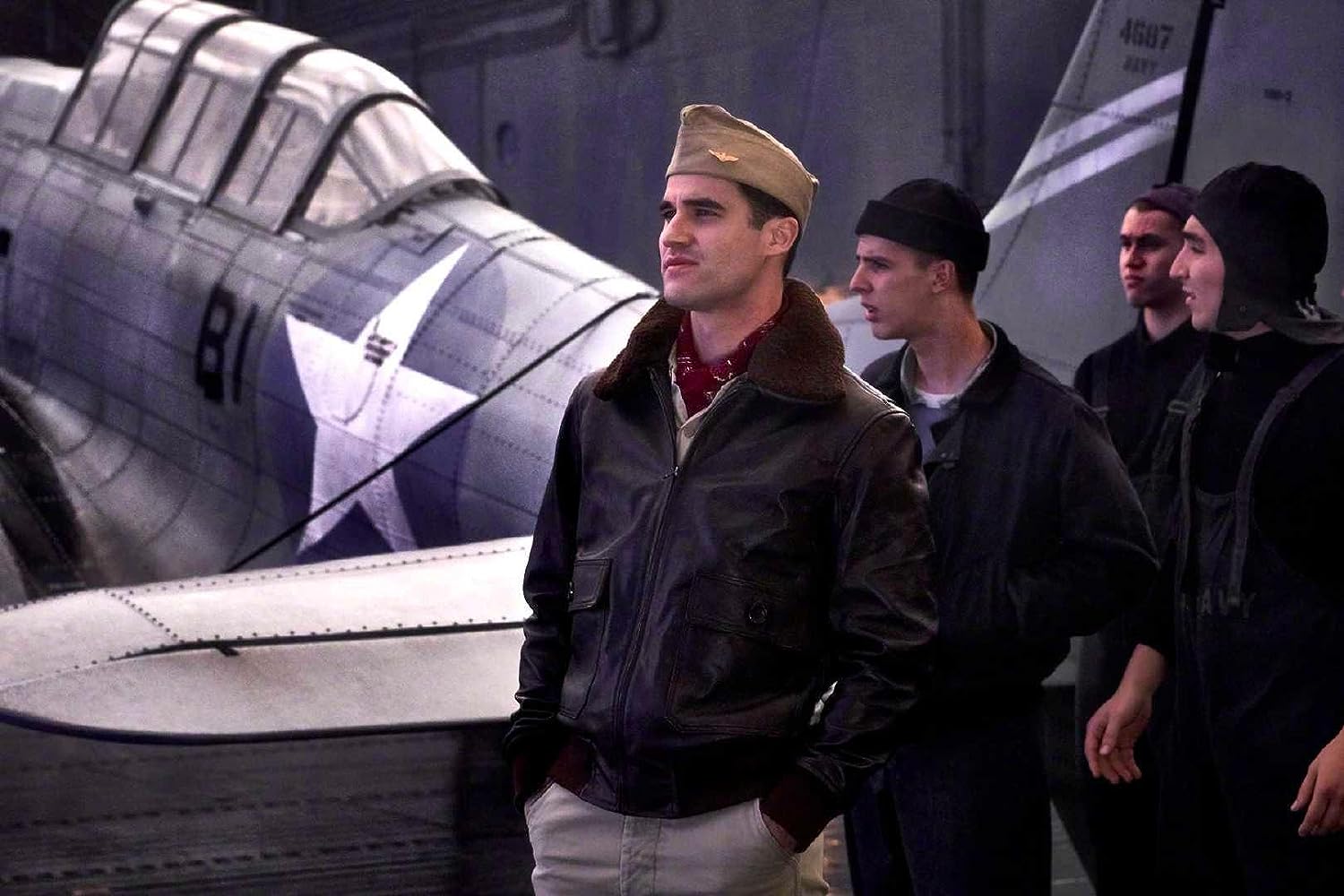 Well, sigh, Midway is faaaaar from that. We can hate Michael Bay as much as we want, his Pearl Harbor – as shitty as it is – is still the far better flick than Midway. And that says something, as Pearl Harbor was a big suprise win for the Japanese while at Midway the Americans won the day. Are American movie audiences secretly masochists and like to suffer through their worst losses over and over again or … yes, Midway was THAT BAD!!!

It started well enough, fast paced, easy on the eyes, good CGI, huge production, quirky and lots of stuff going on … but it became tired and tiring towards the end and I caughtb myself sometimes getting bored. In a movie with not even 2 hours runtime, to make it boring needs some purpose. Emmerich did it!

As I’ve already stated, Midway is a superduper patriotic shitfest and should be just right for the taste of American audiences. From the way our heroes talk to the way they act, it’s all a Hooray for America. I really can’t see any reason for why it should’ve bombed so badly in the local US box office. Not enough marketing maybe, not enough confidence in their own product? A screenplay too bad even for the average 12-years old patriot?

Fact is Midway is a real crapola flick. But firstly that was never a hindrance for huge box office success. Economic success is decided with the wallets of general audiences, not a couple hundred media hacks who call themselves culture critics os sumsuch.

I’ve only found only one influential YouTube reviewer watched Midway: