On the eve of D-Day, the 5th of June, 1944, several American paratroopers are dropped behind enemy lines to carry out a mission crucial to the invasion’s success: destroy a radio tower built in a little castle of an old French town that the Third Reich uses for communication between Berlin and Normandy beaches’ bunkers. Due to the intense enemy fire, the planes are shot down and most soldiers die in the landing or are killed by the Nazis’ night patrols after they land. However, a private named Ed Boyce survives to find Corporal Ford, a last-minute incorporation from Italy and a veteran expert in bombs and explosives, rogue sniper Tibbet, war photographer Chase, and finally private Dawson. After they watch the killing of their superior Sargeant Eldson by a Nazi night patrol, Ford becomes leader of the group and they try to get the town with the tower in order to complete the mission. In the forest close to the town they meet Chloe, a villager who assists the soldiers in her home with her elderly aunt and little brother Paul. But the mission gets complicated when, by accident, Boyce ends up inside the Nazi radio tower, only to find horrible secret experiments with human beings that could empower a victory for Hitler and would change the fate of the world forever. With D-Day approaching, Boyce and the others begin to realize there is more going on in this Nazi-occupied village than a simple military operation. They not only have to fight against soldiers to destroy the radio tower, but also against the results of the experiments to turn the entire place to ruins. All this before dawn and Hitler gets his Third Reich of a thousand years that he promised. 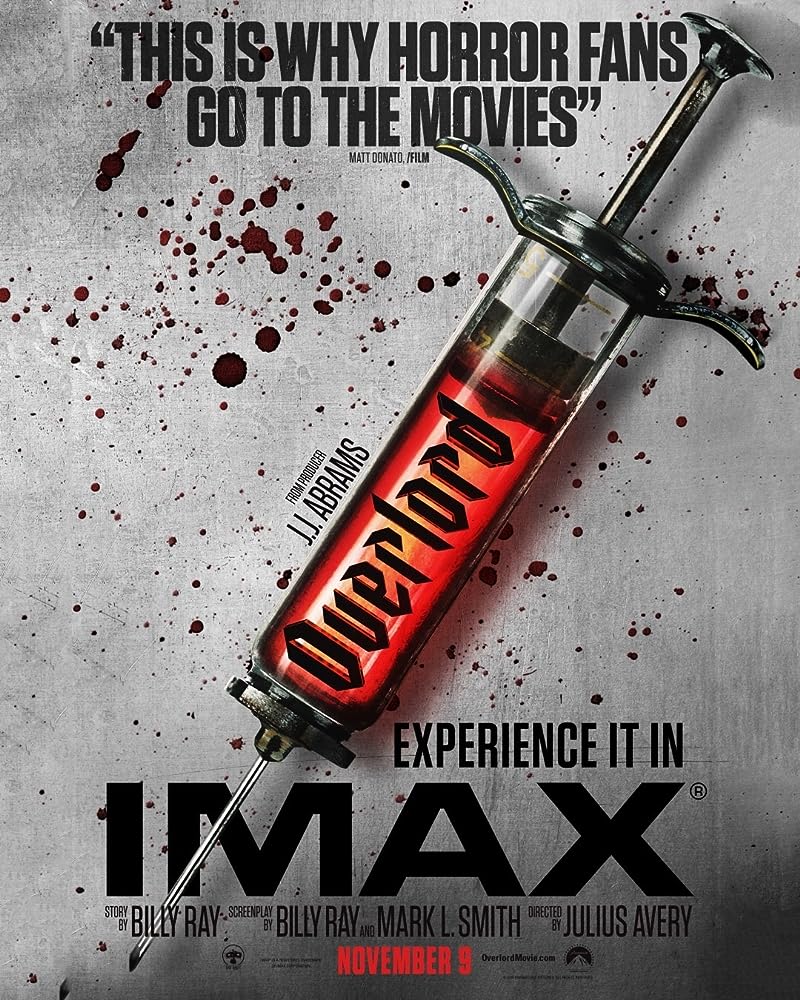 D-Day, American heroes, nazis, a top secret nazi laboratory, zombies, sexy resistance fighter, what more can you probably expect from a movie? And all of these B-movie ingredients brought together in a kinda adult, over produced, glossy fashion completely free of humour and sarcasm. That’s a movie not to be missed! Or is it?
Hubby was pissed pretty much from the beginning coz he expected something over-the-top hilarious like Dead Snow or some Grindhouse production with much laughter and comic relief. But Overlord wasn’t all that, it’s a film that wants to be taken serious. These are not real zombies you must know, they are more like resuscitated persons, and astonishingly agile and quick on their feet. They can think and talk. A really really evil nazi scientific program.
Of course the whole notion is already laughable – but not in this flick! Well, during the runtime of the movie we get to see two or three of those revenants, not a whole zombie army, so the imminent threat to the allied invasion is more like pfff.
And it also wasn’t really neccesary for our ragtag band to get down into the nazi laboratory, as they could’ve just done their job of getting rid of the German radio station and disappear in the woods again … and they could’ve done so without meeting a single nazi, dead or alive.
The only known actor in Overlord is Pilou Asbaek as over-zealous nazi Sargeant/Captain/whatnot Wafner. And he does his part in a pretty creepy way. Nice. Jovan Adepo as private Boyce gives us a good main protagonist and Mathilde Ollivier is the most hesitant resistance fighter Chloe. She’s textbook resistance, the sort of French contact every allied soldier would have wanted to make. Unfortunately she’s got the most stupid litte brother who manages to get captured and get the whole mission into trubbelz. 😮
Not really sure what to make of Overlord: It had all the right ingredients for a silly B-movie schlockfest but it stayed super serious. It had all the ingredients for a super creepy horror movie but horror was what we felt the least while watching this flick. It could have also been an intriguing war raid movie but missed its chance for that as well.
No, it wasn’t a hot hodgepodge but close to becoming one. In the end it was more or less Jovan Adepo’s character Boyce who saved the film all by himself. Because he was the most unlikely hero and his story was the only thing of interest for movie goers. All the other chars, as much as I liked Wyatt Russell’s Ford, Mathilde Ollivier’s Chloe and Pilou Asbaek’s Wafner, were really nothing but card board cut-outs. Sorry.
And now for the big white elephant in the room, the detail that almost destroyed the movie for most of us:

Soldiers of African heritage were not integrated with Caucasian units during World War II. This did not happen until July 26, 1948 when President Harry S. Truman signed Executive Order 9981, ending segregation in the armed forces, and not fully enforced until Secretary of Defense Robert S. McNamara issued Directive 5120.36 fifteen years later on July 26, 1963.

1963? Aaah, I guess they needed some fresh disposable flesh to be killed off over in ‘nam, right? Send in them niggaz, nobody’s gonna miss ’em. So Asians and Africans killed each other for the benefit of the 1% of white Richy Riches.
CONCLUSION: After the breathless opening the movie slows down decidedly and goes from bombastic and fiery to creepy and just mean. Anyway, after having survived the drop into nazi occupied france, one or two zombies here and there aren’t that spooky for nobody anymore. So in the end it was borderline boring despite the mission they still had to fulfill.
WATCH IT? Not necessarily. Don’t get me wrong, there are worse films out there, much much worse. But in  the end Overlord is just a B-movie, made with A-movie care.
YouTube:
https://www.youtube.com/watch?v=-b6jd-zhPdI
https://www.youtube.com/watch?v=M1yFZyOjZlE
https://www.youtube.com/watch?v=PYsjwuV8_TM
https://www.youtube.com/watch?v=pSgGn00Rh7s
https://www.youtube.com/watch?v=CfEo3qCwL9o
PS: No idea what happened to YT video links and why they don’t show up directly no more. Guess the WordPress management is actively trying to destroy their own product now. As if Project Gutenberg isn’t bad enough now they had to kill another nifty functionality. 😦