Why? Oh, you think all those updates would take too much of my time, and my nerves, and my attention?

Ok, yes. You are right! Particularly the kinda aggressive update policies of most Arch-based Linuxes, with multiple updates each and every day could be a bit much … for toddlers and highly busy stock brokers and other manager guys. Or Americans in general. 😉

But who are we, who are you? President elect, top 10 business manager or housewaifu? Huh. Mhm. Yes, I thought so. So you’ve got the time to keep your fancy Linux up to date! I was just reminded of a nightly update, when  I got up from the sofa and started my productive day of blogging. There was an update waiting for me, and ready to be downloaded and installed. And did I go Groan and started whining and moaning about the cruel fate? Naaw. I welcomed it, since each update is always a sign frederic2ec is still alive and busy working on his Namib GNU/Linux. Which is great!

And also … now look at this. Look: 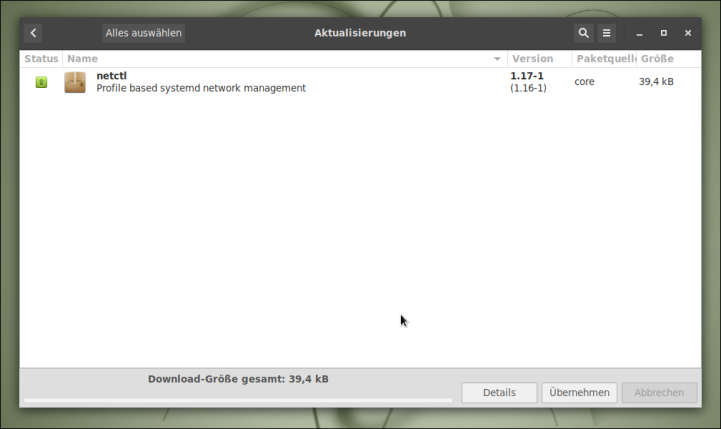 See that? netctl is a profile based systemd network manager … and I’ve got no clue what the heck that even means. As with most of those acronyms I have no idea of what the fuk I’m doing. But Fred sent it to me so I’m gonna install it. As I always do; mostly even without looking at what I’m getting. And now look at netctl, look at how nice and humble and small it is: 39.4 kB. kB, gurlz and bois, kB, not even MB and far from GB. 39.4 kB! That’s fukn tiny! That update was done not even 2 seconds after I clicked on <Übernehmen>, and I could go on with my life, and scribbled this blogpost. Perfect.

And know what is even perfecterer? If and when you followed Orca’s advice and pumped that brand new Linux Mint 19 on your machine, you won’t even get that many updates. There will be one rather big one directly after installation (although not yet, since it’s all on the very latest status and fairly up to date) and during the next couple of days. But from then on there can be weeks, even monthes, between updates. First really big update you should expect around October 2018, when the mothership (which is still Ubuntu) switches to version 18.10. No need to install everything new; just do the update and you’re good for the next 6 months!

You do know that your Mint 19 is an LTS version, yes? Which means you won’t need anything new until 2023!!! That’s how stable and boring most Debian/Ubuntu based distros are. Yaaawn. Until then Microsoft will have changed the whole paradigm of “what is modern computing” a couple times and started some revolution, so you’ve gotta spend even more money for bullshit machinery … without ever getting anywhere. Or have you noticed your lifes becoming significantly better – or at least different – when we switched from Win95 to 98, to ME, to XP, Vista, to Win7, 8, 8.1, 10? That’s why we should never ever trust and engage in revolutions from the top down!

Orca will, if everything goes according to plan – and honestly wcgw, right? – still be on her Arch-based Namib GNU/Linux in 2023, without any new installations if she’s still on this computer, and just roll along. Sooner or later your update circle will break and you’ve gotta install the lastest shiny Minty goodness, while Orca will still be on the same old shit. Only it won’t be the same old shit anymore since by that time the whole system will have evolved into something, like, totally Up To Date! That’s the beauty of Rolling Releases, and their best advantage over Point Releases. And that brings us back to today’s netctl update. That miniscule inconspicuous file is afterall a part of the greater plan, the transformation from the greatest Linux OS to the even greater Linux OS.

tales and travels through the alchemist's lens

Tech reviews on all the latest gadgets!