I was very happy to receive this notecard from Gemma:

You will be one of our Star Guests for having recently had a 10th Rez Day or are soon to have one – so HAPPY 10th REZ DAY from us all at NYC.

Below is a listing of the other people who are also celebrating; my apologies to those that I have missed, but we have sent out notices for a while.

Whoa! Some big names on that list. And all those famous sailors are around my age. Guess I already wrote something about the greatest generation of Second Lifers and I didn’t even lie. 2006/7 marked not only the big wave and influx of new residents from outside the USA but also the last generation of avies who still “got” Second Life and its philosophy. The people who came after us called SL a game and expected everything to be ready made and served to them on a silver plate. Ugh, anyway, this ain’t the time to dabble in philosophy but to look at the handful of photos I managed to make despite my lag.

Yes, and laggy it was. At least for me. Roundbout 30 grannies and grampas in NYC’s ballroom in the sky was enough for my little ersatz desktop to hit the ceiling of its capacities. I’m already proud that Gaga didn’t crash right away but fought thru it.

But I had to log off after a short while already since it was 3 A.M. local times and bed was calling me. You know 10 y/o avies neeed a lot of rest. But at least I was there and even managed to dress halfways casual smart and didn’t look like my usual punk. 🙂

Next morning I logged back in and made a snappy of the party deco. Thank you so very much for this great commemoration party Auntie Gemma. Great idea, great organisation, NYC never fails to amaze us. 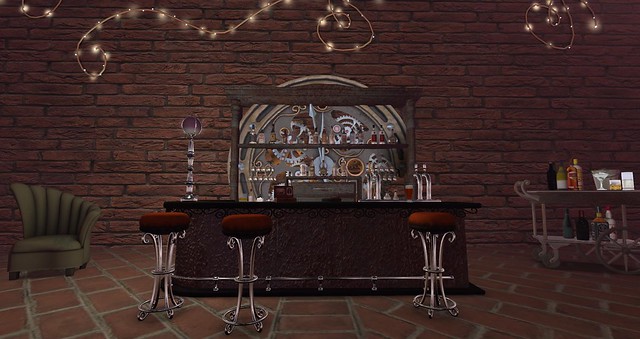 … made better photos than me. And real Flickr albums. Fukn jerries are always so perfect. 🙂