Not really the continuation of my gridwide camping trip today, as I don’t want my two little Lenovos to carry the burden of two altsisters at the same time plus I just acquired this little Honda-inspired scooter-moped vehicle. That thing is wearable and makes a very nifty, practically uncrashable and indestructible vehicle for my explorations. So I’m taking off at the very beach were Phree and me had our last overnighter.

Continuing eastwards. Riding these parts of Corsica one can’t help but feeling good. I wanna stop like every 2o meters and look at all the stuff I see on the roadside. Ah, no wonder. Lots of Japanese immigrants did work and left their mark of quirkyness in the area. Well, somewhere around here I also found my Japanese moped.

It’s either my graphics can’t keep up rendering the environment or there are indeed some empty and unused patches of land on this heavily populated continent. However you will never get bored riding on Corsica since the very industrious population left a lot of ad signs all over the place.

Then, yeah, we see water in front of us. Are we coming up to … 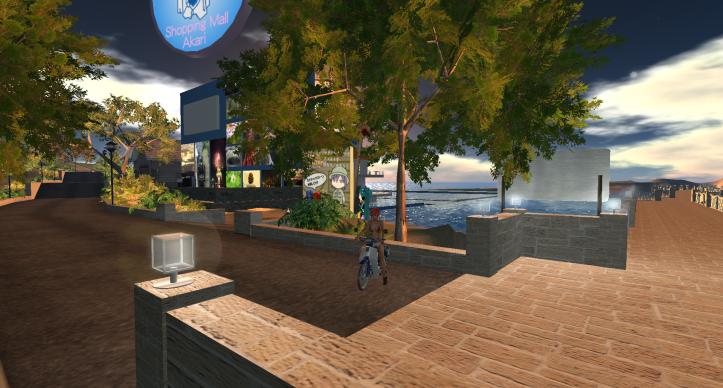 … the infamous dam were Orca was so often already?

Oh yes, indeed. Only today, contrary to most other times, I decide not to cross the dam but take a left and continue my trip northbound.

Yes, after a very short while this robot statue catches my eyes. LOL, it’ll catch everybody’s eyes, as it stands there directly on the side of the Brendon Rez Zone and looks cool but not intimidating enough not to pose with it for a quick snapshot. 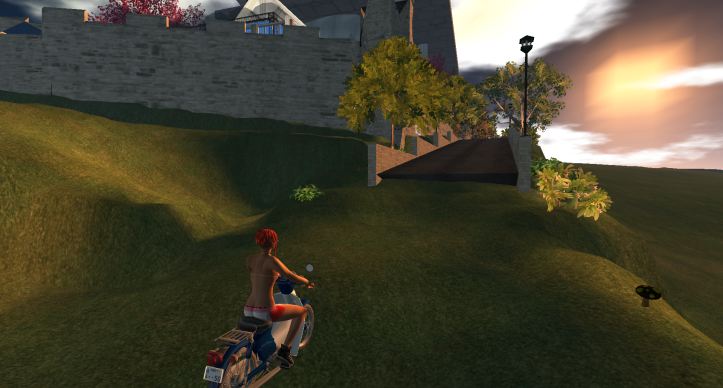 I bet I’m supposed to have some asphalt, or at least cobblestones, under my rubbers. Obviously Gaga’s i3-4130’s HD4400 graphics showing some signs of weakness. Doesn’t matter, as my moped is a wearable it will survive all the shit. I even spent the remainder of my day with that thing attached to my ass and it went with me thru some TPs and flying and climbing and even walking up the stairs in Kitten’s house. Slow af but very cool moped that. And you’ll even get two unridable but rezzable versions for parking at your house. For 150 bucks there’s nuffin to complain about. 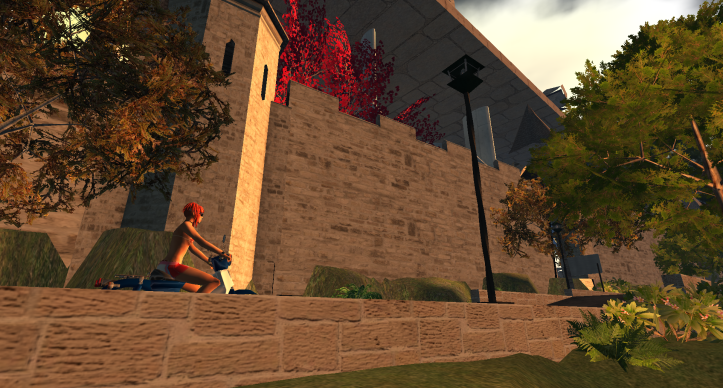 On my left side I see some of the usual castle building shit going on. Very impressive but jeez, as a true Corse you’re supposed to have some business, not a knight’s castle! FFS.

Still it’s fun riding along the foundations of the gigantomaniac build. And look, right side ahead appears yet another wondrous build … 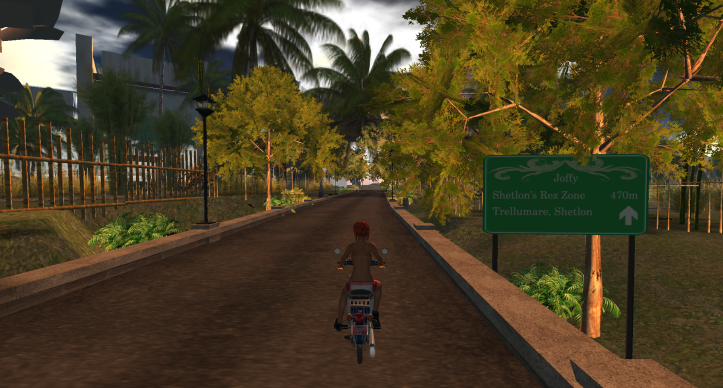 … which obviously wasn’t of any particular interest to me. Else I’d made one or the other snapshot, right? So we just keep on driving thru the very well-kempt continent. Dunno why, but Corses seem to have more style, more ethics, more sense of community than the antisocial inhabitants of, say, Sansara (that’s where Sammie, Lucy, Orca and Kitten and Indi and Eli and other riffraff live). Corses on the other hand, they just want to live in an interesting area and add to it.

Look! Some childish character built his or hers own wild west styled parcel, complete with teepee and gallows. Can’t say I like that but at least it’s interesting and playful and … the fact that someone did it makes it awesome. Reminds me of bad Linux distros in its own cute way. 😉

Then all IM hell breaks loose and I decide to interrupt the search for a campground at the Shetlon Rez Zone and intersection. FYI: This is where you would’ve ended up had you decided to follow the road up east and cross that dam we saw earlier. So we’ll meet here anyway and I can continue my scouting by turning left/west. But that’s a plan for another day.