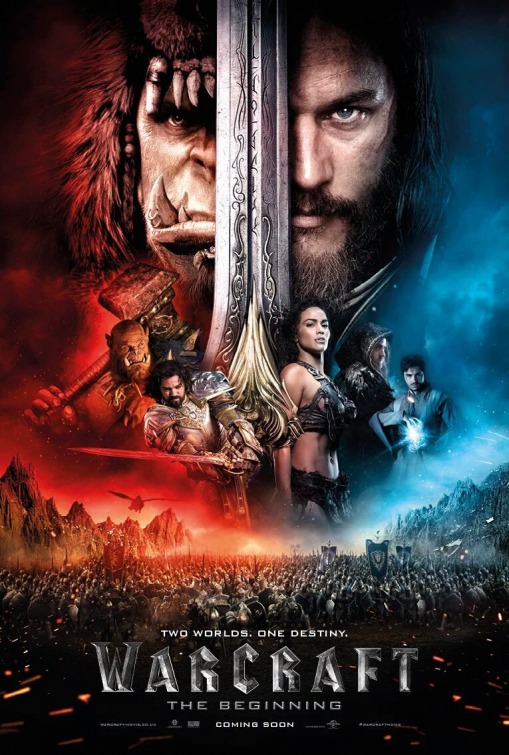 When the world of the Orcs Draenor is being destroyed by the evil fel magic that uses life-force, the powerful warlock Gul’dan creates a portal to the world of Azeroth and forms the Horde with members of the Orc clans. He also captures many prisoners to keep the portal. The king of Azeroth Llane Wrynn and his brother-in-law Anduin Lothar are informed by the apprentice of magician Khadgar that he has found fel magic in dead bodies and the king decides to summon the Guardian of Tirisfal Medivh to protect his kingdom. Lothar and Khadgar head Kharazhan to meet Medivh and a shadow points a book to Khagdar and he takes it and hides. Anduin, Khadgar and Medivh and a group of soldiers are attacked by Orcs and they capture the slave Garona, who is released by King Llane, and she shows the location of the portal. Garona is contacted by the Orc chief of a clan Durotan that wants to meet King Llane to stop the fel magic. Meanwhile Khadgar learns that the gate was opened with the help of someone …

When hubby showed me what he had just downloaded and “we gotta watch this!” I guess you can imagine my disheartened sigh in prospect of yet another wasted evening with some soulless Hollywood dreck CGI shitfest. But before I’ll lose any more words about the film let me confess that neither stupid hubby nor sexy me have ever played WoW, and that we’re not intending to do so in the future. So we have no reference regarding the Warcraft franchise and no clue if the movie is somehow true to the backstory of the game and its characters or if it’s all just made up specifically for the movie.

In so far our ignorance makes us the perfect audience. For us Warcraft has to work  as a standalone movie, without reference to the greater lore. And, to make that clear right from the start, Warcraft succeeded at least in that regard.

That doesn’t make it necessarily a good movie. And, to be perfectly honest, I’m not too sure about Warcraft’s qualities as a movie myself. It could be super bad or recently well … or even a bit of both. That’s how I experienced this movie, as a wild but uneven ride, ever switching between B-Movie and absolute masterpiece.

Ok, the details. Let’s start with the director Duncan Jones. As much as I loved his tour de force, Moon, I guess that film was so great because of Sam Rockwell’s achievement as actor. But let’s say, yes, Duncan Jones is a good director, I guess with depicting a multimega alien world in Warcraft he plays a bit out of his league. Moon was afterall a independent film, which can’t be compared with a blockbuster like Warcraft. I’d say he lost a bit of the needed oversight.

Let’s go on to the characters/actors now. There we just have to mention Toby Kebbell as the Orc chieftain Durotan, which he plays kinda soulfull and readable, which gives a whole new dimension to Orcish characters, which we only knew as stupid canon fodder from the LotR movies. Well, in Warcraft they have finer and individual characters, and Durotan happens to be not only the leader of a tribe but also a loving husband to his “lovely” and preggers Orc wife.

I also liked Travis Fimmel’s kinda airy portrayal of Durotan’s human counterpart Anduin Lothar. Fimmel didn’t have to change much from his Ragnar Lothbrook character in the TV series Vikings. Yeah, they are basically both the same barbarian warriors with some brain. I don’t know if that’s Fimmel’s trademark or if he’s just a bad actor but for me he always appears as if he is either drugged or just not in the mood for shooting a movie. Doesn’t matter, if you roll with him he’s good in both roles.

Dominic Cooper played his heart out as the king of Azeroth, Llane Wrynn. But he came a bit short on weight and gravitas as a king. Not his fault, just bad casting.

Ben Foster as the mage Medivh also played very very well, but he’s too young and lacks the gravitas his role demands.

And then there is Paula Patton, the human/orc halfblood slavegirl, who brings a totally new sexyness into our old Tolkien-infested minds. A good-looking orc. Who’d thought?

What about the expected CGI shitfest? Well, what did we really expect? I guess there isn’t enough money available on this planet to set a huge world like that of Warcraft in scene with only practical effects, so CGI was not only expected but also accepted as the only possible way to shot a film like this.

It was even quite the contrary. I guess we can be lucky the producers didn’t make an anime of the source material. And CGI, I gotta admit, looked great throughout the movie. I can’t remember a single scene where the CGI stood out like a sour thumb.

Last but not least the story. As was to be expected it was the standard affair of betrayal, friendship, love and conquest. Easy to follow, easy to grasp, real popcorn material for a younger-ish audience.

My main criticism about Warcraft are the all-important battle scenes. It’s probably in regard of the PG-13 rating they are rather disappointing and weightless and left no impact on neither hubby nor me. Jeeze, H-wood, get your shit together! It’s a movie about people and orcs who’s whole lifes and worlds are about violence, it’s a movie called Warcraft … and you don’t show us shit? No nitty gritty dirty bloody gutsy fighting. Nothing but comic figures having a little fisticuffs here and there. In so far does Warcraft defy its very existence. It was in the fight and battle scenes when Warcraft lost me to boredom.

CONCLUSION: Not as bad as anticipated, not as good as it could have been, the Warcraft movie lives in a strange twilight zone. Afterall Warcraft tries to pack too much stuff into its 2 hours runtime. This is supposed to be an epic tale, and epic tales usually need an epic amount of time if you wanna tell them right. Compressed into a mere two hours it feels rushed, and the character development falls completely by the wayside. Guess with LotR consists of three long movies, why GoT got a whole series with eight seasons? Because that is appropriate, it’s what is needed to tell the whole saga. Anyway, we still had some fun.

WATCH IT? Not necessarily but it won’t hurt if you accidentally stumble over it. WHAT THE EXPERTS THINK:

Mark changed his mind about this movie and filmed a second review: